The store will not work correctly in the case when cookies are disabled.

While CrossFit may not be everyone’s cup of tea, one undeniable merit is its universal sense of community for the athletes that partake.  No matter where in the world you travel to, if you drop in for a class at the local CrossFit gym, you’ll be welcomed with open arms.  However, sometimes even the most dedicated CrossFitter might find themselves in a situation where dropping in for a class is not possible.

Whatever the reason - busy travel schedule, unfavorable logistics or location, etc - sometimes the at-home workout is the only one available.  These are the times where a portable method of resistance training comes in extremely handy.

Adding in CrossFit bands to perform band versions of some staple exercises will add more strength work (and more fun) to that bodyweight-only workout.  Many CrossFit workouts can be modified or just written to include bands in lieu of weights. Although, I should note that one standard component of CrossFit - Olympic Weightlifting - does not really translate to resistance bands.  These lifts are too complex and become very awkward when trying to perform alternate versions. The training effect just simply isn’t worth it.

In a moment, I’ll give you some examples of CrossFit workouts you can modify to do with bands.  But first, let’s examine the properties of bands, so you understand how to use them to their fullest capacity.

Bands have traditionally been used as ADDITIONS to barbells and dumbbells, to provide Accommodating Resistance.  As elite powerlifter and coach, Dave Tate, explains from the research:

“Zatsiorsiky defines accommodating resistance as using special means to accommodate resistance throughout the entire range of motion rather than a specific point.  Because of some joint angles and the velocity of movement, the force of the movement is less at certain joint angles. For example, in the barbell squat you may able to quarter squat 500 pounds while you can only full squat 300.”

While we are going to get creative and use the bands as SUBSTITUTIONS for barbells and dumbbells, the rules of physics still apply.  Tension will increase exponentially as the band gets stretched, and it will drop off exponentially as the band recoils. The trick will be to find an appropriate size band for the given exercise, so that you’re still getting resistance but the movement is not impossible to complete.

Take the Deadlift, for example.  Let’s say you can comfortably deadlift 400 pounds for at least a few reps.  If you set up enough band tension to equal 400 pounds, you would likely not be able to move much out of the bottom position.  You’ll have to use a lighter band, combine bands or leave more slack on the band between your feet so it shortens the ends of the exposed section of the band(s) you are holding.

Yes, that means the resistance won’t be the same as using a barbell, but these modifications are not intended to replicate weight lifting - just mimic it enough to give you a solid workout.  An easy solution to this is to simply do a few extra reps, in order to create a similar level of fatigue.

This principle of increasing tension also means that bands are used most optimally for lifts with ascending strength curves - where your position becomes stronger as you near completion.  Examples of these are movements like pressing, squatting, and deadlifting. By contrast, a descending strength curve would be something like a bicep curl, where it gets harder for your muscle as you near the top. Check out some step-by-step instructions. 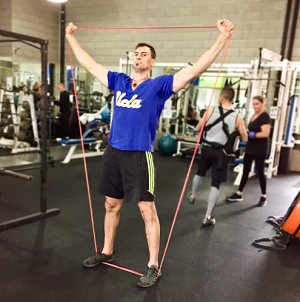 Take a hip-width stance and stand with one strip of a medium band under both feet.

Take a grip on the other end of the band, that is just outside shoulder-width.

Slightly shift your head and upper torso back enough to clear your face, and press the band straight up over your head.

Finish with your arms locked out and your head back in its neutral position.

The more you spread your arms the more it will engage your lat muscles, a feature you are unable to do with iron. 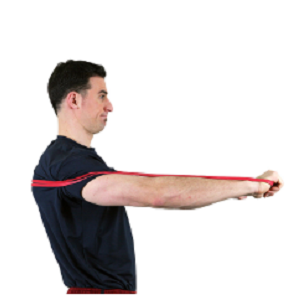 Wrap a small band around your back, through the middle of your shoulder blades.

Grab each end of the band, and lay down on your back.

Press the band up, just like you would with a barbell in your hands 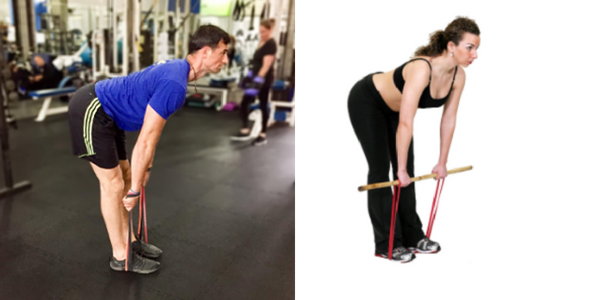 Take a hip-width stance and stand with two strips of a medium/heavy band under your feet.

With a  rigid neutral spine, sit your hips back and then bend your knees enough to grab the ends of the band coming out the sides of your feet.

Maintaining that position and tension, drive into the floor with your legs and extend your hips to finish in a straight standing position.

Return to bottom position the same way you got into it.

Note you can also insert a bar or dowel to equalize the resistance and replicate the feel of a barbell. 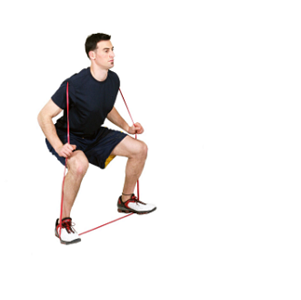 Take your standard squat stance (however wide you need to be), with one strip of a band under both feet.

Pull the top part of the band up and over your head, and let it rest on the top of your shoulders and traps behind your neck.

Go through your squat movement as usual, with the band sitting where a barbell would be and get your glutes involved. 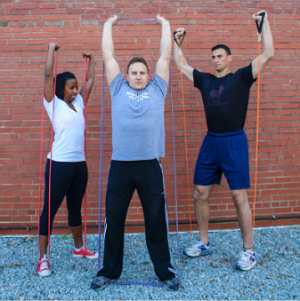 Take your same squat set up as above.

Take the top part of the band and reach it up over your head with a fairly wide grip.

You should be able to have your arms locked out and your shoulders externally rotated (elbow pits pointed up).

Go through your Overhead Squat movement as usual, with the band sitting in your hands where a barbell would be.

Note that this would be the same formation for a push press as well. 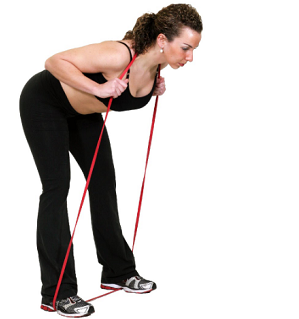 Take a hip-width stance and stand with one strip of a medium band under your feet.

Pull the top part of the band up and over your head, and let it rest on the top of your shoulders and traps, similar to the Back Squat position.

Let your knees bend slightly, but do not bend them much during the movement.

Keeping a rigid and neutral spine, push your hips back until you can no longer maintain proper spinal posture.  You may feel a big stretch in the back of your legs.

Pull your hips forward to return to the starting position. 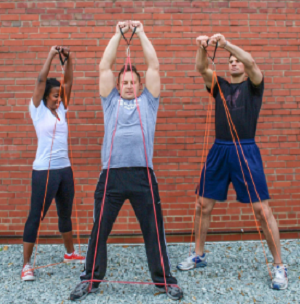 Attach one end of a band to a post or rig, at hip height. Your feet can work too if necessary as demonstrated below.

Step inside the loop of the band, facing away from the post.  The band should now be flush against the top of your hips, similar to where a belt would be.

Walk out away from the post until you have as much tension as you can balance with.

Keeping a rigid and neutral spine, push your hips back until you can no longer maintain proper spinal posture.  This is the same body movement as a Good Morning.

Drive your heels down into the floor and pull your hips forward until you reach your starting position, standing straight up.

The CrossFit “Girl” WODs are workouts with specific movements and rep schemes.  You may have even done some of them yourself, and compared scores with other crossfitters. Here are a few examples of “Girl” workouts, that can be easily performed with bands instead of weights.

5 rounds for time of:

3 rounds for time of:

The other group of standard CrossFit workouts are the Hero WODs.  Most of these require extra equipment and/or include Olympic lifts, but here is one that translates well to bands:

Between the resistance exercises I listed above and the plethora of bodyweight movements possible, there are endless permutations of intense workouts to get you through those can’t-get-to-a-gym times.  If you follow someone’s programming, use that day’s workout as a template and see how you can make it work with bands. Or better yet, get creative. If you come up with band variations of other exercises, tag Rubberbanditz in a post so they can show off your ingenuity.

This article was contributed by Elliott Schackne, a veteran strength and health coach and Precision Nutritionist with over 10 years of experience. In addition to being an all-around good dude, he is a former D1 football and tennis player at the University of Connecticut and a competitive CrossFit Games medal recipient.

The Rubberbanditz editorial team are leading experts in the fields of bodyweight and resistance training. With experienced certified personal trainers on staff, there's no exercise we haven't tested and tried.

There's a band for everyone